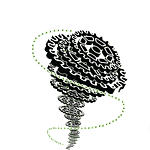 The South Metro Cyclones are a middle and high school mountain bike team in the south DFW metro area.  We typically practice at south central DFW area trails. We would love to have you join the team.

Get to know the coaches behind the South Metro Cyclone. We come from all walks of life and love sharing our skills to get more kids on bikes. We’ve been part of the Texas league for many years and have kids who race.  We would love to have you join us.

Cole Camp started riding mountain bikes while in college in Colorado Springs. Life and work travel sidelined his 1994 Gary Fisher Hoo Koo e Koo with the exception of the occasional ride with friends. Spurred by their love of camping and riding at 24 Hours in the Canyon, he decided to introduce his daughters to the sport at a GRiT ride. Along the way his love for the sport and community was rekindled. He is in his third year of coaching.

Michael was racing BMX in the late ’70s. He got his first mountain bike in 1996 for his birthday. Since then he has ridden and raced MTB all over the world, including Canada and Africa. He has raced the 10-4 in Kenya and has ridden in Moab, Squamish, Pisgah, and Sedona. He averages over 4,000 miles a year on a MTB — he refuses to purchase a road bike; he is a capable mechanic having built a few bikes himself. This is Michael’s second year of coaching.

South Metro Cyclones ride at 8:30 a.m. every Saturday morning and 2:00 p.m. every Sunday at various locations.

Below is a tentative schedule. Please contact coaches for more specific details as practice times and locations may change.

Thank you to our sponsors